The night Jas came home from Bosnia after burying his father Akif, he informed me that Ramadan had begun and that he was going to begin the thirty-day fast in the morning. When I asked for specifics about Ramadan, which Jas has never observed or even indicated the smallest desire to observe, he told me: “I can’t eat or drink from sunrise to sundown for thirty days. At the end, there’s a big feast.”

Now, this is a typical response following my questions about the meaning of Muslim practices, holidays and observances. I’m given a clear explanation of the type of celebration or manner of observation (“we get dressed up and visit neighbors” or “children get money”) but never the meaning or reasoning behind it. When I’ve asked for further explanation in the past from Jas or any of my in-laws I’d only get blank stares. This can be attributed to growing up and living in a formerly communist country which doesn’t leave much space for religious practice. While Tito didn’t outright ban religion in Soviet-style, he didn’t encourage it either. For many Bosnians, religion was/is part of their heritage over anything else. Ethnically, Jas is a Muslim. Religiously? Spiritually? Not interested.  Even Akif who devoutly fasted on Ramadan only began doing so after the war, as did other Bosnian Muslims who had previously not been so inclined.

A little research gave me further understanding of Ramadan which is observed during the ninth month each year of the Muslim calendar. Muslims must not only abstain from food and drink but impurities of all kinds including thoughts and actions. The goal is to cleanse the body and soul and focus your attentions on your connection to and worship of Allah. In the weeks before he died, Akif expressed his sadness over not being able to fast during Ramadan. He wouldn’t be able to get through a day with no food or drink in his condition. This is where Jas has found meaning; the fast is his mourning song. “I’m going to do it for my dad,” he said. “He’d be fasting now, so I’ll do it for him.”

Less than a week away from the end of Ramadan, Jas has shown remarkable resilience . After the first two days he adjusted his daily fast duration a bit. He’d come home from work, watch me and Cookie eating our first few mouthfuls of dinner with a pitiful look on his face and then do some chores around the house or turn on the television until sundown. On day two, I (gently) suggested he join us for dinner.

“Your dad would love that you’re doing this for him. I don’t think he’d mind if you chose to eat dinner with your girls,”  I said.

He ignored me. On day three, he grumbled something about me having a point and sat down to dinner with us. Weekends have been the most difficult. It’s easy to distract yourself at work but when you’re home and relaxing and food’s being cooked  and consumed, it can be downright torture. Or at least that’s what Jas’s face looks like when he pokes his head in the kitchen and asks what time dinner is.

Now he is counting the days and we’ve started planning the Bajram celebration that follows Ramadan this Sunday. How will we bring this tradition to America?

“Yes, but what is served at this feast?” I ask.

It seems I have a bit more research to do.

Late morning Jas and I make our way downstairs, eyes puffy with jet-lag. On the kitchen table there’s a basket of fresh bread and a platter of cheeses alongside sliced tomatoes and cucumbers. As we start to eat my father-in-law Akif comes in from the garden and hands me a freshly cut rosebud.

School is out and I’m in the garden, next to the fountain Akif built, reading a book. I hear the front gate open and a tribe of students enter asking for Akif. I point to the house and they slip off their little shoes and go in to visit with their retired teacher and tell him all about their progress. When they leave they’re each holding a small bar of Kinder chocolate.

There’s a fire in the outdoor oven. Akif and I take turns shoveling white hot coals over the cast-iron bell that covers a pan of braising veal shank and potatoes that earlier he’d shown me how to season. We all gather around the table for a late dinner and play cards into the night.

These are the memories of a typical day with my father-in-law though typical is not a word I’d ever use to describe him.

Akif was an elementary school teacher for most of his life. During the war, after his release from the Serbian detainment camps in his hometown of Donji Vakuf, he met up with my mother-in law Mirsada (now deceased five years), Jas and his sister Jasmina, (all who he had sent to the relatively safe town of Umag) and traveled to the refugee camp in Savudrija, Croatia. When he saw the children there bored and idle, he started a school for them.

Education was not just Akif’s lifelong profession but the fabric of who he was. I know this first-hand from having apprenticed in his kitchen. We each spoke a little Italian and even less of each other’s native tongues; but cooking filled in all the gaps–it was our language. Akif spent hours upon hours teaching me to stretch dough, stuff miniature cabbage rolls, shape cevapi (beef sausages), make bread, meats, stews, sweets, and juices from fruits and flowers. He had endless patience for me and my million questions. 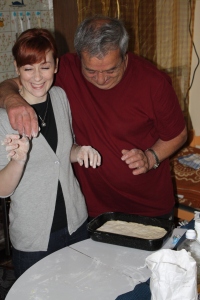 That he cooked at all made him a wonder amongst the community as this usually falls under the duties of women in Bosnia. It was even stranger that he loved and excelled at it having learned from his father who had owned a coffee shop. Women from the neighborhood would come to watch Akif make baklava  complaining that they could never get his technique down of rolling and cutting the pastry into shapes that looked like roses.

As a father, Akif was happiest when his children Jas and Jasmina were together, even if he wasn’t with them. He thrilled over Jasmina’s visits to the U.S. and when we were all together he’d often ask me to take pictures of them. In regards to me and my brother-in-law he referred to us as his (“my Christa,” “my A.”) and treated us as though we were indeed his own. When I was pregnant and craving American food particularly french fries he cooked me a batch every day and he was known for passing off new clothes and gifts to A.

The loss of his wife Mirsada was one of his greatest sorrows and he continued to reminisce and dream of her until the end of his life. I think the only thing that made this easier was his children and grandchildren. L., D. and Cookie called Akif, Deda, and he would spend hours playing with them. Cookie he could talk with endlessly over Skype, dancing a stuffed bear across the screen for her. 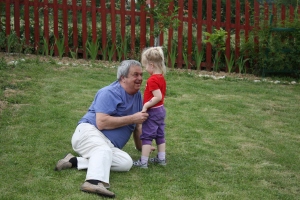 Akif and his oldest granddaughter L. in Travnik, 2009. 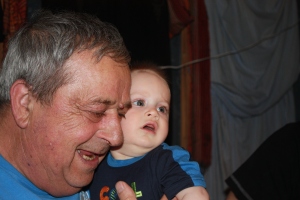 Akif visited America this past January along with Jasmina and L.–his very first trip–to celebrate Cookie’s first birthday. None of us realized that it would be one of the last times we’d spend with him. He passed ten days after we returned home from Bosnia in July of lung cancer. Though he was sick and could barely walk up the stairs, one of the last things he did before we left for the airport was lift Cookie onto his lap and hold her.